On What it Means to Be Human

There are days when I find it really hard to just be a person making my way through the world, this world of instant opinions and shouting and clickbait and judgment. But, not coincidentally, I've learned that those days are the ones where I've narrowed my "world" to digital interaction - be it social media or watching the news.  It is on those days when I forget that what makes me breathe more deeply, lets my shoulders crawl back down my spine from the place they often perch up near my earlobes, helps me relax into my own skin is actual human contact. Face to face encounters. Speaking with other human beings while I look them in the eye.

As a writer and an introvert, I spend a great deal of my time alone, but with the internet at my fingertips, it doesn't always feel that way, and I sometimes forget that those experiences are not true human relations. I absolutely appreciate the web for purposes of research and connection - especially to those who live far away but about whom I care deeply. But they are no substitute for being in the physical presence of another person.

As I watch how quickly arguments get out of control and how easily it is to throw insults around, I am reminded of what it means to be human.

Last week when a person I love dearly was struggling with something, I felt sad for her. Half of my brain was scrambling to find a solution so that she wouldn't have to endure this discomfort any longer than absolutely necessary, and the other half was listing the reasons this particular situation wasn't really all that horrible (no doubt in some effort to both distance my self and to pretend that she wasn't in as much pain as she was demonstrating).

Fortunately, I was able to let my brain fire off thoughts like buckshot without ever opening my mouth. Instead, I sat with her until my feelings of discomfort with her pain subsided. And when I had sufficiently recognized my visceral response for what it was, I said this:

I don't get to decide what is hard for you and what isn't. And, I think mostly, you don't either. If I love you, my job is to trust you when you say something hurts. My experience or judgment of the situation has no place in the equation. It may be that you're walking barefoot over a bed of hot coals and, while my first thought might be to tell you to put some shoes on or find another path, that's not helpful. For whatever reason, you've found yourself here right now and if I want to show my love and support for you, I will acknowledge your pain and struggle and hold your hand while you feel it. I don't get to co-opt your feelings or your story. It is not my place to show you my own personal bed of hot coals in order to distract you from yours or prove that mine is longer or hotter. I will simply believe you when you say you are hurting and offer my strength as you make your way through this difficult time.


So much of the content I see online and on TV on a daily basis consists of people fighting over whose trauma is the worst. We are competing for clicks and likes and bragging rights and forgetting to recognize that without connection to each other, none of us can survive our individual traumas. And while there are some incredibly positive things that happen online, too (I love seeing news of babies being born and people falling in love and hard problems being solved), there is no substitute for a hug or a high five from a warm-blooded person standing next to you sharing that news.  And so the next time I find myself neck-deep in frustration or sadness after checking my Facebook feed and the local news, hopefully I will remember to go find someone to look in the eye. Because being human is so much more satisfying than being "right" or being righteous.
Posted by kario at 8:53 AM 5 comments:

PTSD and Wildfires: A Metaphor 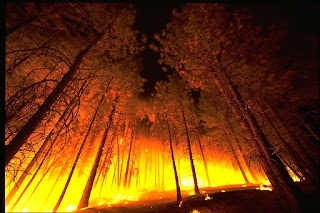 I was listening to a story on NPR the other day about wildfires in the Pacific Northwest and one person who was being interviewed was part of what they call a “mop-up” crew. These are the people who come in after the fire is out and look for dead wood that might fall, trench areas that need it, and look for parts that still might be smoldering.  In large forests, it’s fairly common for roots to be on fire quietly beneath the forest floor and spontaneously erupt into new fires if the area isn’t checked thoroughly. It is these folks' job to be hyper vigilant, to scan the terrain for danger.

I feel like that’s my nervous system in a nutshell. The original traumas were the raging wildfires that I worked to control and extinguish, but there are still hotspots in places I haven’t looked and when someone says or does something that triggers my original abandonment issues, I am suddenly right back in the middle of that forest with a raging flare-up. Hello, PTSD.

Despite all the work I’ve done in therapy and on my own, learning to uncover my deepest insecurities and face them, sitting patiently with my demons and learning to embrace them, combating the mean voice in my head that says I’m worthless, there are still pockets of mess that I am occasionally surprised to find. Somehow, I thought I took care of this, but there was one more tree with smoldering roots just waiting for some oxygen to feed it. And oxygen feels like such a benign thing, right? Who is afraid of oxygen? Often, it is as much a surprise to me as it is to the person who said or did whatever they did, and as much as I’d like to be able to apologize for my massive response, the fact remains that now I have a new fucking fire to put out. I wish I had the time to explain or assure you that it's all going to be fine, but I don't. I have to put on my helmet and boots and fireproof jacket and wade in because ignoring these small flares isn't an option.

There’s no way I have the time or resources to send out a mop up crew to look for every possible spot that might flare up some day. The most I can do is clear out the old dead undergrowth, set boundaries to help me feel safe, and look those damn flames in the eye when they rise up. The good news is that because I did the hard work to put out the original fires, it doesn’t take as much time or effort to quiet these smaller ones, and as long as I am completely honest and upfront with people about feeling triggered, I have done my part.

Honestly, most of the time I go through life just admiring this forest of mine - wandering through its lush greenery and feeling blessed at the variety of things that grow there. I am so grateful to have come through those fires of my youth and be where I am today, and frankly, happy that I am in such a good place that I do get surprised when a flare-up happens. [That doesn't mean that I'm not annoyed as hell when it does. My inner monologue goes a little like this: Really? What the hell? Didn't we deal with this already? Who is the one in there that keeps flipping the switch? I told you, we're not in danger anymore. This is different.]

But these days, I can quickly move from frustration to compassion. Obviously, there's someone in there who is still afraid, who remembers all too well what it meant to be engulfed in flames, and she is hollering for help. And that's when I go into mop up mode.