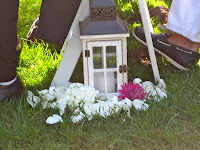 Family is such fertile ground. I feel as though, even though the same crops are grown there over and over again, generation by generation, there is enough rotation to keep the soil rich enough to produce hearty stock.

I grew up knowing that my mother's side of the family was a matriarchy. Yes, there were boys and men, but their numbers were far fewer (and their voices much less boisterous) than the women and girls. I suppose there were times when we females abused our power, but more often we reveled in it - celebrated it. We cooked and laughed and played hard. We spent summers on the beach, kicking up sand and surf, playing volleyball and scraping the tar from the soles of our feet with turpentine-soaked rags. We collapsed in heaps at the end of the day, our bellies full of barbecued chicken and baked beans, and snickered as we listened to the adults pour more wine and raise their voices to be heard over each other.

Returning to this nest for my cousin's wedding last weekend, I was excited for another generation to experience what I knew as a kid: this family is all about family. Eve and Lola found their second and third cousins and, within minutes were devising games and giggling and chasing each other around the room. Now that my mom and her siblings are the oldest generation, they have slowed down a bit and from time to time they seemed acutely aware of their status as the elders. They have tightened their ranks around each other a little more as the vulnerabilities of age creep in, leaving no doubt that this is one group that will look out for each other.

With all fertile ground, some weeds creep in. There are decades-old hurts that rub like sandpaper on tender flesh and some new issues that require a delicate touch. There are stories that have grown with each re-telling and some of them have thin walls that bulge out like aneurisms ready to burst. On the flight home, I was reading "Waiting for Snow in Heaven" and when I came to the following quote, I had to catch my breath, "Loss and gain are Siamese twins, joined at the heart. So are death and life, hell and paradise." And so, in this family, on this special occasion when one of us was getting married and the rest were coming together in celebration, we felt the losses as acutely as the love. My grandfather, a larger-than-life personality if there ever was one, was sorely missed, but attached to that sadness (joined at the heart) is the gratitude that comes from being among these people who know us so well and love us anyway.
I wrote once before about the notion that the abrasive nature of emotional pain, while uncomfortable, may be simply a way to open up more space for love and joy. I may decide I like that metaphor better than Carlos Eire's metaphor of Siamese twins. But for now, I am content to acknowledge that the two are part and parcel of each other and turn my face more toward the light.

Your posting today touched me deeply, Kario. I also went back and read your 2007 posting about your dad in the hospital and then home again. Between then and now, he has moved on to whatever comes after life's journey.

But his family continues to join in celebration of togetherness. It is so wonderful when each new generation carries on that tradition.

Thank you for sharing this and also your thoughts on abrasion opening up our hearts. That seems so wise to me.

So glad you had this special time, and the wisdom and open heart to glean its many gifts. Also very glad you shared it in such a profound and rich way.

What a thought provoking post. I have felt the abrasive nature of life and death, and can also see the siamese twin analogy. They are so intertwined, and when I think of the most painful deaths I've lived with, I also think of the waves of growth that have emanated away from the pain. I am a believer that there is little growth or change, without abrasion of some form.
I also went back to read the piece you wrote before. Your eloquent choice of words was soothing and felt connecting.

I really admire your generosity -- so often descriptions of family, hell, the experience of family is fraught with conflict and deep and dark things. While you acknowledge this, there is also much light and love and wisdom in your thinking and description.

fullsoulahead.com said...
This comment has been removed by the author.
4:46 AM

"some of them have thin walls that bulge out like aneurisms ready to burst. "

Such a meaty line! Wow!

Glad the wedding experience was a positive one.

Seriously touching and thoughtful post.. A favorite line 'With all fertile ground, some weeds creep in. There are decades-old hurts that rub like sandpaper on tender flesh and some new issues that require a delicate touch.'... Honesty and tender..

Beautiful post, and as Brenda and fullsoulahead pointed out, some phrases that are so wonderfully crafted.

As one without that kind of family I am envious of the dynamic you so poignantly describe, joys and sorrows included!

Kario, thank you for commenting on my blog posting today. You are so right about nurturing relationships coming before "book learning." It's a prerequisite I think.

Maybe because of my convent years, I always tried to build community in the classroom. A community in which a students felt safe asking questions and offering answers because they knew that the other students and I would appreciate every offering without judgment or ridicule. Feeling part of the whole makes for growth. Feeling safe brings forth the best in all of us.

Very effective piece of writing, thanks for your post.